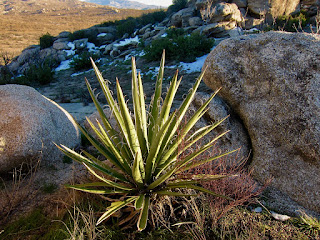 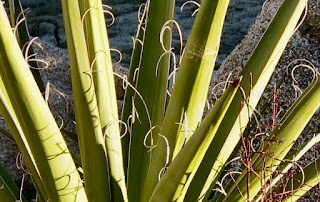 In the morning we catch a glimpse of an eagle or large hawk on the boulder by our camp - it lands on the same rock where Alex stood last evening to make the most of the view. You can see his shadow in the photo. 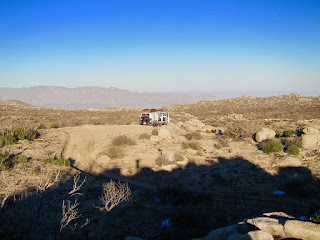 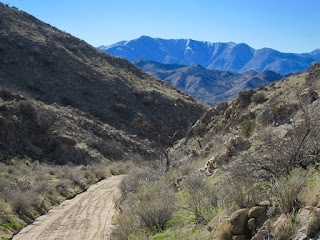 Would you be able to resist this road?  Our choices: return to S-22 on the same dirt road; follow the loop that will return us to S-22; or go along this mystery road that we're guessing will end up taking us through Grapevine Canyon to Yaqui Flats.

The drive through Grapevine Canyon is gorgeous.  We see mountain lion tracks in the middle of the road.  There are places where Q must step down boulders.  (We will later discover a dented rocker panel.) There is no way to turn around to make another choice...and it would be much more difficult climbing back up Grapevine Canyon.  Big sigh of relief when we spot utility poles and then a park sign!

We head through the park and then north past Salton Sea, and then towards Joshua Tree NP  through Box Canyon.  We ogle the beauty of Joshua Tree and continue into Mojave National Preserve.

We head through the park and then north past Salton Sea, and then towards Joshua Tree NP  through Box Canyon.  We ogle the beauty of Joshua Tree and continue into Mojave National Preserve.

Our first night's camp is at the base of Granite Mt. Our camp is just off the road - about 4 miles of dirt road off the paved road.  We see many rabbits - or have many sightings of the same rabbit?

In the morning we drive to the park visitors' center to gather info.  The train still runs past the depot that serves as the park visitors' center.  The center is also a museum.  The iron ore that was mined here near Kelso was discovered to have other elements - in essence contaminants that weakened it - and that proved disastrous for the Liberty ships.  During mining days the depot and round house were needed for steam engines that assisted Diesel engines up and over the Cima grade.  Trains still use the tracks - we see several pass by while we are enjoying our fresh pineapple at one of the picnic tables outside the depot. 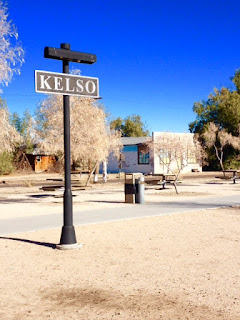 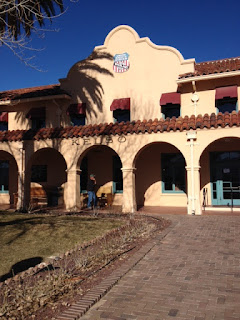 According to one of the displays in the museum, the cost of developing the railroad in the US was off-set by establishing national parks and then advertising them as destinations for rail travel.

We learn that the only grocery store anywhere nearby is at the northwest exit in a tiny town, Baker.  Our plan: restock a few things and return to the park to see the cinder cones and get inside the lava tube.  Ranger Matt tells us the the philosophy of the current park supervisor is that the land should be restored to the most primitive state possible - while remaining somewhat accessible to visitors.

Translation: most of the roads are dirt and alternatively rutted or sandy.  Backcountry campsites cannot be created, but only revisited when there is evidence that it has been used previously.  And no camping near roads.  And no camping off roads.  Okay?