Dec 23rd
Here is a sweet surprise: a brief status txt from Marilyn (blogger Linda's sister) reveals that she & Doug are a mere 40 miles ahead of us on the road to El Paso.  We inadvertently also make the same gas stop and hatch plans to camp together at Leasburg State Park in AZ.  it is pouring rain so we opt for side by side campsites with pads so that we aren't stepping in mud.  It is a cozy dinner shared in their camper.

In the morning, M&D head west ahead of a big wind storm while we go north to see cousins Roger & Diana in Elephant Butte.  I'm wishing i'd captured Roger's carvings.  They are amazing and beautiful.  Diana's artistry is expressed in a frozen packet of wild rice and sausage.

The rest of the day is consumed with a drive through the mountains to Silver City.  We pause at Emory Pass to admire the view and read about Lt Col Emory, Kit Carson, and Aldo Leopold.  The climb is impressive (thinking about the road builders) - and the views around each s curve are beautiful. 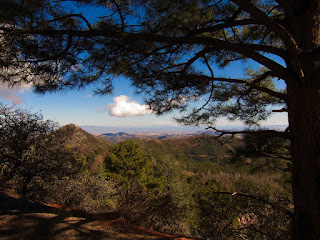 Blue sky view from near Emory Pass
Dec 24th
Our campsite is in Catalina State Park, AZ.  Morning light will reveal more, but the smells of the desert and the forest are delicious.  Alex cooks snow peas and lamb.  We managed to reserve the last campsite, but the campground is quiet - though not nearly so much as the isolated sites in Big Bend.  Believe it or not, the middle of night coyote howls sound a lot like loons.

No room at the Catalina campground for us to stay another night.  We're hoping to see Alex's siblings, but cold, winter weather begs us to stay south of the snow.  Rangers mention that Picacho Peak SP has plenty of room for campers.  An unofficial advisor tells us that there is nothing there to do except climb the big peak.  Christmas Eve dinner: turkey drumsticks cooked over mesquite wood served up with wild rice & sausage (provided by cousin Diane in New Mexico).  It is very windy and rainy outside so we finish cooking inside Q.  It is so beautifully cozy and adventurous at the same time.

Dec 25th
Food won't remain a prominent theme here, but it is Christmas!  We start the day with scrambled egg burritos, corn salsa, and avocado.  A Christmas breakfast to fuel our Picacho Peak hike.

A surprising number of hikers are out here on Christmas.  Some brag a bit about being outside hiking instead of home eating; others just exchange smiles and Christmas greetings.

The sunset brings big color to the sky and the opportunity to sit near the fire as the remainder of our mesquite wood burns.

Dec 26th
Sun City holds Alex's sibs.  (Alex is the youngest of the five siblings by 7 years.)  We try to imagine this constantly sun-drenched life.  Insight from Alex: the sunlight is harsh due to condensation trails from heavy air traffic around Phoenix.  We have driven many miles of desert, but this sunlight is reflected or bounced in a way that lowers our tolerance.  The big sky isn't as blue.  The glare demands sunglasses.  However, Rita, Mary, Dan, and Gene make the visit delightful.

Tonight we will camp in California's State Park, another Picacho.  We're hoping for one of the riparian sites since the ranger tells us that only a few of their 54 sites are occupied.  We'll drive north out of Winterhaven to the edge of the Colorado River.

Dec 27
No exclaiming over a camp in Picacho Park in California. Failed navigation finds us rolling along S24 to Imperial Dam instead.  The camping area here is somewhat informal as campers find their own way over sand and around desert vegetation.  About a dozen campers occupy what looks as if it was once a more organized layout.  We see no way to register or pay, so we settle in.  I've been looking forward to the promised waterfowl who migrate through here where the water is plentiful and i'm not disappointed.  We see tracks and poop from wild burros and hope for a sighting.

In the morning as we wind back through Bard towards I-8 our intention is to stop at one of the date markets.  The timeline is now drawn towards the Gigi. Gigi is really G.G. = Great Grandmother.  She is Ruby, my mom and likely the best mother in the world.  She can make very much out of little - in the best way.  We have been so very fortunate to have her now with us to the splendid age of 100.

Posted by Linda Williams at 3:33 PM