We head west again to see the Gigi.  Joshua Tree National Monument is a favorite, but we find every campsite filled and end up camping just outside the park boundary - along with another hundred or so campers.  Camping near Gigi is easy as we return to the Lake Jennings campground.  No key limes this time, but still pretty and friendly, and a mere 10 minutes from Gigi’s place.

The first night we find ourselves in a campsite that invites other campers to stroll through on their way to the bathroom and showers.  It is almost as if we are invisible so close to Q do they stroll. The staff graciously move us to a secluded site well off the unofficial trail to the bathroom.

We leave the Gigi knowing we are heading homeward.  But wait...it won't be a straight line (or even an interstate highway route). Our first stop will be to check out the hot springs at Jacumba [ha-KOOM-ba].  If there are not archaic ruins, there is at least a lot of history to explore.

Though they may not have called it Jacumba, the first people must have had reasons to appreciate the hot springs just as do we.  The first known residents were Kumeyaay.  In the twenties, this was the hot spot for movie stars and celebs before Murietta and Palm Springs were developed as spa resorts.

All that remains of the original hotel is the fireplace.  The hotel we occupy is one built in the 1980s and renovated after the turn of the century.  It is quaint. This is the first non-Quiggy overnight of our 3 month journey!

Jacumba is right on the border with Mexico.  And there is a massive fence.   The fence went up in the 1990s with the result that the small community was cut in half. Devastating to both halves.

We hike looking for vortexes and possible petroglyphs, but instead find a defunct railroad museum.  This seems to fit with the Road to Ruins theme for our road trip. 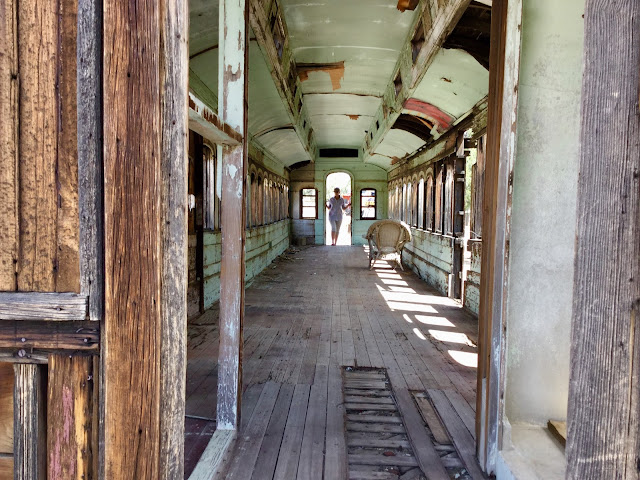 The vortexes are behind locked gates, and petroglyphs well hidden. The return to Q brings appreciation for great mattress and pillows.  One should not expect those in a quaint hotel i suppose. As we head for Yuma, Alex suggests breakfast in Old Yuma. Note this recommendation for you: The Twisted Kitchen in Old Town Yuma is a terrific place for brunch. It is packed - and yet we dine outside at a peaceful sidewalk table.  The only traffic on the main street of Old Town Yuma seems to be cars and bicycles bringing twisted diners.

A few more miles of road and we opt for a stop at the Painted Rocks State Park in AZ.  The campground that was nearly full when we visited in February is empty except for the camp host and a couple from Alberta who we meet when they drop by to talk a bit. They are vegetable farmers, they say.  It is not yet planting season in Alberta.

Is the campground empty because people just don’t care to camp in 95 degree weather?    We shelter in Q’s shade when we’re outside - or under the palo verde tree.  The palo verde tree is a marvelous desert adaptation. When it is too dry to support leaves, it can photosynthesize through its green bark. 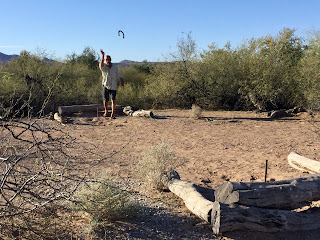 Adjacent to our campsite - an opportunity for a horseshoe tossing rematch. Ringer!

For the first time this trip we open all windows and doors to allow fresh desert breezes to circulate through Q all night long. The night sky view is incredible so far from city lights.
Posted by Linda Williams at 5:32 PM