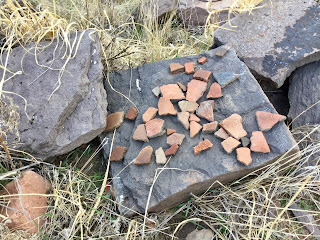 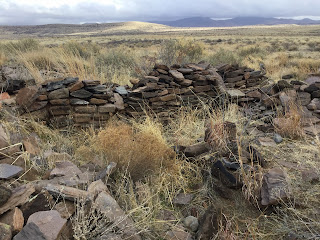 The information at the site of the ruins tells us that it was a culture now known as the Perry Mesans. At Pueblo la Plata they built an 80 room structure - and left lots of pottery shards. To find the ruins we drive 8 miles along Bloody Basin Road.

Before this move to higher land people lived in more than 450 sites for over 2,000 years in what is now Agua Fria National Monument. The river separates Perry Mesa and Black Mesa. We explore the ruins at Perry Mesa - including lots of pottery.

At one point, archaeologists say, there were about 3,000 Perry Mesans living in and around here. It is beautiful - and a bit chilly in February, but we imagine the elevation would also make summer heat rather easier to take than it is slightly more south in Phoenix.

The Perry Mesans moved on ~1500 and the Yavapai came to stay for awhile The Yavapai people still live nearby in Prescott and Camp Verde. 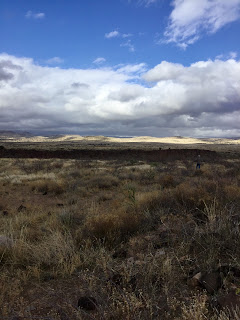 Wind moves the clouds around changing the view minute by minute. The camera (and my use of it) don't do the views true justice. Even if camera lens and photographer could capture it well, you'd still be missing the smells and sounds - and how sweet the wind feels. 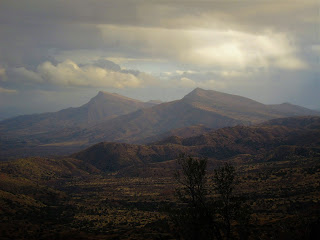 The drive from Agua Fria into Cave Creek is another breath-takingly beautiful ride on a twisting road. Our camp will be in the outside curve of the road with an incredible view of mountains and valleys. We see evidence that cattle often congregate here. Do they appreciate the beauty? 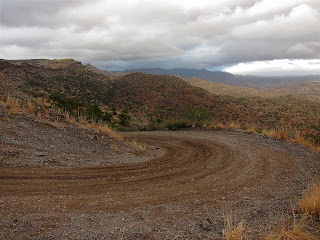 From our wild camp we return to a northern Phoenix favorite at Lake Pleasant. “No, the top of the camp site is flat, only the drive up is steep.” “Okay, we’ll take it. It isn’t far to walk to the shower.” In reality, it isn’t possible to pull even a small camper-van into a level-ish spot, so we opt for wild camping inside the civilized camp ground. It is still not a bad walk to the shower. 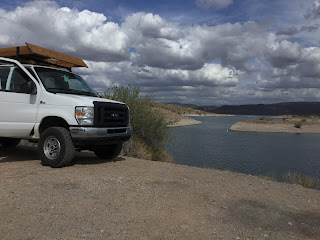 Posted by Linda Williams at 2:04 PM