The Rules of Horseshoes

After 3 days in Organ Pipe we drive north out of the park.  The drive across the Tonoho O'Odham land is beautiful too.  Lots of creosote, saguaro, and chollas...and surprising patches of green grass and other patches of bright yellow-orange flowers.

We make the customary jokes as we pass through Why, AZ.  They are similar to "Who's on first?" but it is really mostly about being a little giddy with the joy of this continuing adventure in the desert.

Our overnight will be Patagonia State Park tonight so that we can maximize the benefits of an official campground.  We'll clean BBQ and stove, and shine pots and pans, and clean and reorganize Q...and get some nice warm showers.  Plans to rotate Q's tires and lubricate joints are thwarted.  The grease gun really just doesn't deliver the juice.

We'll attempt to cheer ourselves up with a barefoot-in-the-sand game of...horseshoes.  I think the pull-ups into Q have done some good.  I can throw those shoes all the way across the court.  That's a win!  We decide that first one to 11 will be winner, though later we discover that the real game goes to either 15 or 21 - or for professionals it is 40. 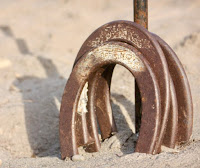 As we expend a lot of energy throwing wild, we decide that our 11-11 tie can remain the final score.  Later, with the info about real game scores I find that my leaner isn't worth 2 points...so Alex is the real winner of our horse shoe throwing contest.

The morning brings a new idea.  Since Nogales is a mere 15 miles away, we will combine a Mexican breakfast feast with tire rotation.

Little could we have guessed that an incredibly delicious breakfast would be available in the parking lot of Alex's Tires.

The sign on the food truck says OPEN, but there isn't anyone around and the tables surrounding the truck look as if there was a great party here last night.  What it really is: the same power outage that struck the park also hit Nogales.  Everyone who was hungry at noon came here to Roman Trujillo's Charisma Catering food truck in the parking lot of Alex's Tires because they knew that he would be cooking under generator power - and that the food would be delicious.   A tired chef and business partner arrive before we can lament their absence.  Chef Trujillo asks what we'd like - and we ask what he feels like preparing. 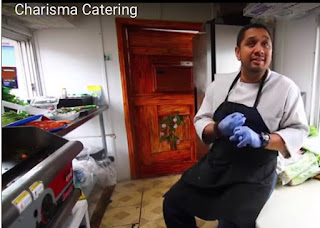 Tire rotation - $15.  Breakfast plates of quesadillas and eggs, accompanied by a berry smoothie. Cost = only slightly more than tire rotation.  The quesadillas are filled with dark meat chicken, cilantro, a little cheese, and lots of pico de gallo.
(The photo is from a YouTube video, BTW.)

Tires rotated and hunger satisfied we're off to see Kartchner Caverns.  We get the last two tickets of the day - most visitors make reservations in advance.  We're waiting outside the building in the sunshine when Ranger Brooke springs into action, rounding up all the 2:45 pm tourists.  She comments that her normal energy level is reduced after guiding two elementary school kid groups earlier.  It would be something to see Ranger Brooke at her normal energy level.  She says that usually two guides are present - would  Alex mind acting as tour sweep closing freezer doors after the group passes through each of the sealed areas?  Kayak guiding experience pays off for Kartchner Caverns SP. 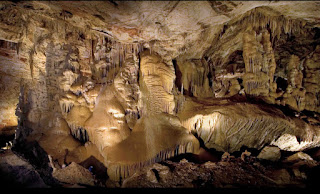 All cavern tours are guided.  The park philosophy is to protect the natural state of the caves, so there a lot of rules.  No photography (this one is not ours), no touching cave walls, no food, no pets, etc; and just before entering, all humans are spritzed with water to be sure that the humidity of the caves is not reduced by visitors. The cave temperature is about ~75 degrees with 99% humidity.

By the time we're leaving the caves it is nearly time to be settling into the next camp site.  Our goal is The wilderness part of the Chiricahua National Monument in SE Arizona,

Posted by Linda Williams at 1:08 PM