Pine Hills and Trail of Tears

Dark of night by 6 pm; when darkness descended we were 100% charged from solar, so freely used inside lights for settling in.  There was growing daylight by 6:40am when hunters' shots began.  48 degrees inside Quigley and 42 outside.

Dec 11th
Mississippi R crossing at Cape Girardeau; west to Poplar Bluff, MO before turning south to meander through the Ozark Mtns of Arkansas to land in the land of our sweet Ruby matriarch. 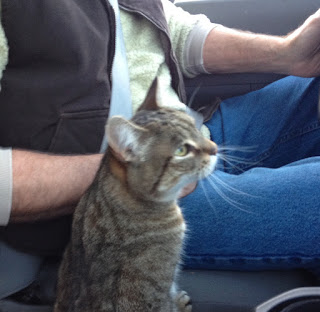 Captain while still under the influence, attempts to take over the helm.

Discovery: It is unreasonably stressful to drive miles on winding mountain roads in heavy overcast and then arrive in the thick of city traffic after dark.

Dec 12
Captain discovers more of her own kind ruling here near Devil's Den.  Middle of the night conversations and paw playing under the door.  Larry is a large marmalade-colored, friendly cat who shares Marilyn & Doug's house.  The other kitty whose manners allow her to be indoors is Lorna, who is short-haired grey & white.  It is shy Lorna who is most likely to befriend and support cautious Capt Tasha.