Nearly 3 months ago we camped at a sweet spot in Palo Duro Canyon not far from Amarillo.  Flowing by our campsite was the Prairie Dog Town Fork of the Red River.  If you happen to be that one blog reader who remembers (time warp factor) you'll see the satisfying circle back to land carved by that little river fork.  We're about 80 miles southeast - that is a lot of carving. 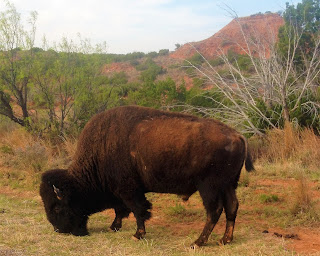 Now on our journey towards home we are southeast of the Red River in a beautiful escarpment carved certainly for our delight.  Caprock Canyons State Park is gorgeous and peaceful in spite of being home to the Southern Plains Bison Herd.

We spend the sunset hours watching a big dark boulder with a tail that occasionally swishes.  The bison roam free here, but apparently are not very interested in camping humans. 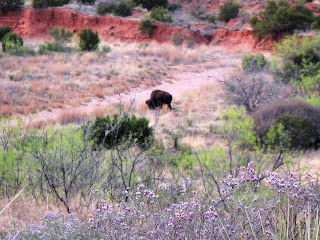 When we first noticed him, it wasn't clear whether he was huge boulder or bison.  A swish of the tail made it clear.  He munched his way almost into camera range.

The clearer photo above is from Q's window.

The red cliffs certainly make a gorgeous backdrop for the gorgeous beast. 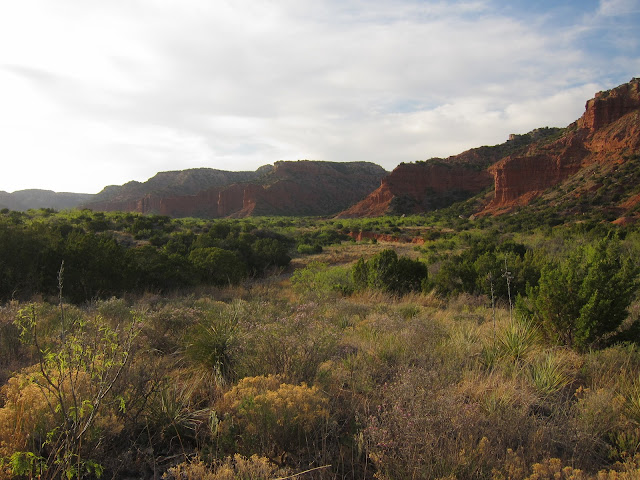 From Caprock Canyons we head eastward through a surprising little town, Turkey, TX.  We are missing the Bob Wills annual festival by a week.  You can listen to Bob Wills' radio show to get an idea of why he is still appreciated.  His friendly critics say that his music continues to be heard because he included jazz licks and hot (take off)  licks and fine rock guitar beats

He grew up here in Turkey showing early his extraordinary musical ability. As an adult, he moved to Fresno, and then lived outside of Sacramento, but eventually returned to Texas. 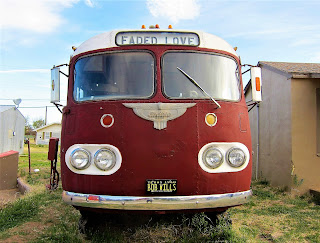 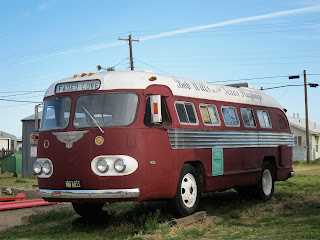 Out of Turkey we head towards sister & cousins in NW Arkansas.  It is as close to home as we can get without being home!  And so ends this journey - if this blog was real time instead of warped. it would look like it is bumping into the next one.

Posted by Linda Williams at 5:57 PM